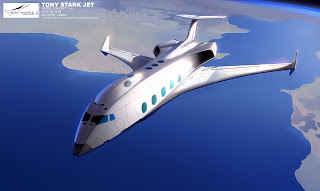 All Images Copyright Marvel Entertainment, LLC, 2010
We were going to see this thing hit low low orbit and go zero G Virgin Galactic style when Tony had to make a quick trip from Cali to Washington, but for what I'm sure were many reasons it didn't make it in. Anyway, fun stuff! The final interior was designed by Nathanial West.
Posted by jbachdesign at 12:12 AM 20 comments: 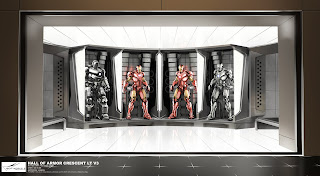 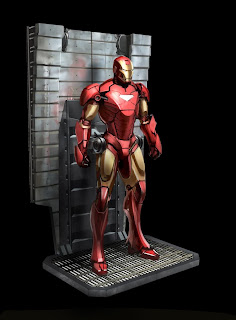 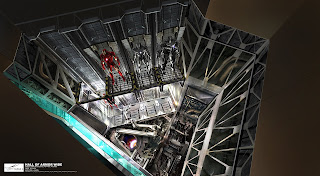 All Images Copyright Marvel Entertainment, LLC, 2010
Good times. This started as an extension of the 3d holo system that Tony uses to design his toys throughout the film. One idea was that in this film you would get to see how the suit was assembled and disassembled through the awesome apple-esque work surface that covers Tony's entire garage. Michael Riva envisioned the suits on display in a clean black room at the back of the garage. Tony would walk in where a rush of air coming up from the grated floor would bring your attention downwards where you would realize that the Hall of Armor goes down another level or so. When activated one of the suits would lower through the floor on a cartridge delivering it to the machinery that disassembles it to be built onto Tony at the other end of the garage. You would see all this happening through the holographic interface covering the floor.
Jon Favreau eventually ended up going with the much simpler version--shown at top--that made it to the film.
Posted by jbachdesign at 11:57 PM 3 comments:

Image Copyright Marvel Entertainment, LLC, 2010
My small contribution. So many people took a crack at the function this thing and it came out great in the end. I had my go after an all nighter doing one of many revisions for the Hall of Armor. Ryan Meinerding was the wizard that designed the look of the suit, George Hull the actual suitcase, while my crude mock up for deployment served to guide the fx crew as they figured out how the thing was actually packaged and clasped together.
Posted by jbachdesign at 11:38 PM 1 comment: 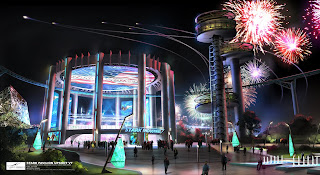 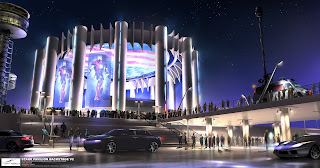 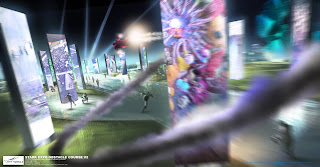 There were many buildings designed of which their placement in the expo was constantly in flux. I kept this image and the one above it clear and ready for an buildings on the site, but the idea of this very large split-domed pavillion got dropped and so they never got filled in. 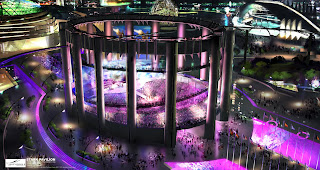 This is an earlier version of the Stark Expo, which was then called the Roxxon Pavillion. The scale got a little too grand and I had to pull back. 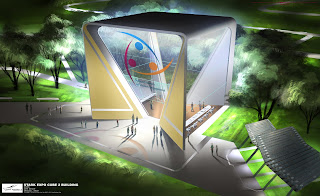 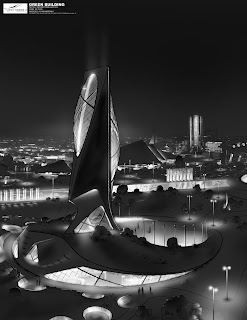 All Images Copyright Marvel Entertainment, LLC, 2010
Lots and lots of buildings. Several artists attacked this large project in preproduction including Mark Goerner, George Hull, Nathanial West, Darren Doctherman and many more in post. They were highly diverse in style as they were representative of many countries and companies...not that you could tell with how fast they zoomed by. Mark Goerner and I did a lot of work for Tony's expo which happens to be a building that still exists from New York's 1964 World's Fair in Flushing Meadows.
Posted by jbachdesign at 10:55 PM 1 comment:

Image Copyright Marvel Entertainment, LLC, 2010
Director: Jon Favreau
Production Designer: Michael Riva
To late?? Ok, this time it's really been a while. I apologize to anyone that has been checking the blog every so often only to be sorely disappointed by my lackluster updating practices. I won't get into excuses, but will say that there is lots of work I did for the Iron Man 2 movie that I can finally show.
I came onto the film initially to work on buildings for the Stark Expo. There were many slated for what was then to be a retro-futuristic re-imagining of Howard Stark's expo '74. It was a rigorous learning experience working with Production Designer Michael Riva who was ever energetic, inventive, kind and demanding. I definitely had to kick it up a notch to satisfy a loaded pre-production schedule in which a wide range of ideas were on the table; all of which had to be visualized to be a more relevant part of the conversation. There was a prescribed menu of work dictated by the script, but every once in a while there was the fun "what if we did this?" I worked on a wide range of designs for the movie and of course there were some that never made it to the screen as a three hour run time is frowned upon. Some of the designs I was fortunate enough to work on were significant to the story, some were not and didn't make the cut. I enjoyed creating all of them regardless.
Posted by jbachdesign at 10:03 PM 4 comments: