Working on tuning a new technique for developing environments quickly while retaining the ability to make major changes easily.  This took around 3 hours, but could definitely use some clean up.
Posted by jbachdesign at 10:13 PM 12 comments:

Down at the lab 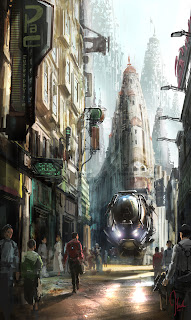 I think that's a P.F. Chang's over there..  Been boning up on some environments trying to crack a quick construction method that works for me.  I've got taking a long time down pat on these two, but things are starting to come together.  I really like the density of certain urban environments, as you may be able to tell from some of my past posts.  I find that I get caught up in the detail and sometimes it ends up taking longer than planned in the beginning to work through a piece, but  I'm going to start focusing on the main thrust of an image during it's initial inception and I think that'll make it move along a lot faster.  I had some success with that kind of direct simplicity on the quick "Tome" sketch, so I'll have to apply that to a painting that requires more detailing and see how that works out.
Posted by jbachdesign at 12:44 AM 7 comments: